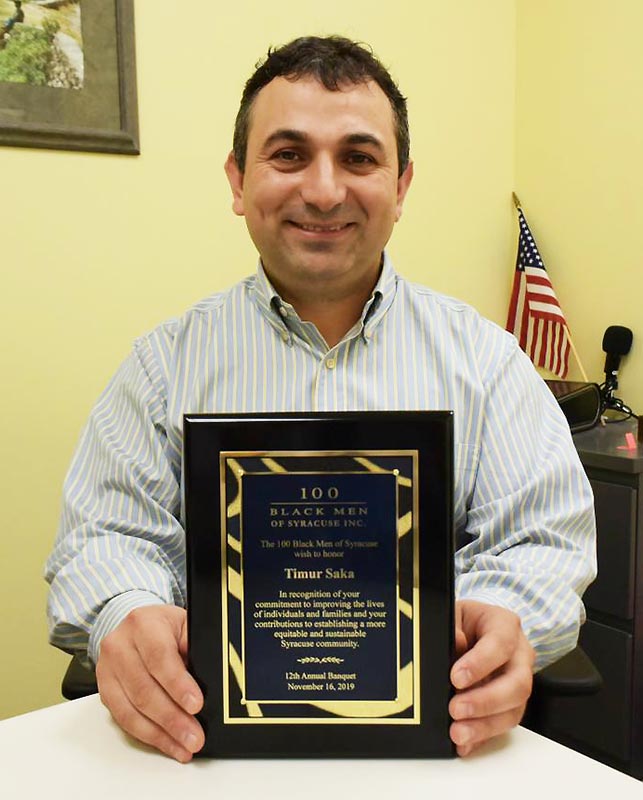 The kindness of a total stranger changed the course of Tim Saka's life. It was the mid 1990's. He had just graduated high school in his native Turkey and been accepted into a college English program. His friends didn't believe he knew how to speak English. They challenged him to find an English-speaking tourist and engage in a conversation. Saka accepted the challenge and traveled to a tourist hot spot in the city of Ephesus. He picked a stranger out of the crowd and started a conversation with him. "I asked him if he knew English and if I could speak English with him. He was a school psychologist from Denver on a photography trip to Turkey." After about 20 minutes, they exchanged addresses and went their separate ways. Not long after that, Saka received a 20 page letter in the mail from his new pen pal. He answered the letter in English, sparking the beginning of an amazing relationship.

Four years later Saka graduated from college. His pen pal offered to fly him to Colorado where he could enroll in a language program, earn his masters and become a librarian. "It was a leap of faith. He paid for everything. At the time I didn't realize what he was doing for me. I thought it was a normal thing."

Eventually Saka would come to understand how remarkable this person's generosity was. "I told him 'maybe you shouldn't do this. I can never pay you back.' He told me he wasn't expecting me to pay him back. He just wanted me to help others. He said, 'I helped you start your life. Whomever needs your help, pay it forward.'"

Fast-forward 19 years to the night of November 16, 2019. Saka was now the board president of the CNY RISE Center, a cultural center on the south side of Syracuse. RISE stands for respect, inspiration, service, and empathy. Their motto is "we rise by lifting others." Saka was presented an award at the 100 Black Men of Syracuse gala in recognition of his organization's commitment to improving the lives of individuals and families and his contributions toward establishing a more equitable and sustainable Syracuse community. "It was a humbling experience to win this award. It was so meaningful to see immigrants recognized for everything they are doing in the community."

Saka serves his community in another way. He's an Instructional Technologies Librarian in Onondaga Community College's Coulter Library where he assists students and faculty. "I love the culture of OCC. It has that climate of inviting everyone in, and the focus of students always comes first. Those priorities really excite me about working here."

Saka became a United States citizen earlier this year. As he and his wife raise their 12-year-old daughter, they work to instill in her lessons learned from a stranger he met more than two decades ago. "We're teaching our daughter life is a lot better when we help others. I really love this country and I love the people. Syracuse feels like home and we are so proud to be part of the society here."

100 Black Men of Syracuse held its 12th Annual Banquet on November 16, 2019 at Oncenter. The theme of the event was "The Future is Now". The steadfast efforts to uplift the next generation of Black men through mentorship and education was celebrated at the evening.

The national organization 100 Black Men of America originated in 1963 in New York City and the Syracuse branch was opened a decade ago. The organization, with volunteers and community partners, provides on-going educational training programs, mentoring, tutoring, student scholarships and economic empowerment seminars.

Held at the Oncenter, 5 honorees received acknowledgment including our board member Timur Saka for his community service through CNY RISE Center. Mr. Saka mentioned about his past experience of mentoring Robotics Program students and he mentioned about the recent campaigns including "Endgin Childhood Lead Poisoning" or "Childcare Initiative in Onondaga County".

There were 17 high schools that were applauded for their participation in various programs such as Robotics and Drones. Teams who represented North East Region at the national competition presented their projects at the event.

100 Black Men of Syracuse President Drake Harrison said their goal was to prepare the next generation for the global competition. He also mentioned about the field trip they organized to Washington D.C.

For more information about 100 Black Men of Syracuse, visit 100blackmensyr.org